"Legends of the Speaking Profession"

Every industry has its ways of saying “I value what you do” to its members. In the field of professional speaking the awards include:

I have had the great honor to receive all of these awards in my 40 years of professional speaking. And, a few years ago, I was honored by a group of veteran speakers at the “Veteran Speakers Retreat” with the award called:
It is a great affirmation of my contributions bestowed by the people I’ve known and admired these many years. Frankly, I’m a bit uncomfortable with the word “Legend” applied to me but grateful nonetheless. 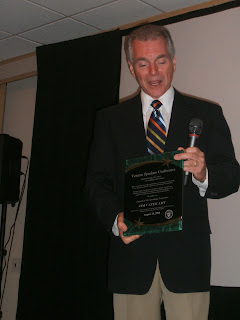 Other “Legends” include: NSA’s first president, Bill Gove, Charles “Tremendous” Jones, Cavett Robert, Jeanne Robertson, Larry Wilson, Don Hutson, Norman Vincent Peale, Earl Nightingale, Joe Batten and Dr. Ken McFarland plus around 30 more.
My wife, Paula, and I attended the Retreat in Hagerstown, MD, where by coincidence I had been the keynote speaker last year for the Chamber of Commerce’s 80th Anniversary Banquet.
It was a special time spent with some of the speaking industry’s top performers. True masters of their craft.
The inductees for that year were:
I consider the other “Legends” to be much more worthy of that designation than I.
And, I’m really pleased to be counted among them.
For further information on this award contact Ed Helvey, a long time colleague and friend who coordinates the activities of the Veteran Speakers Retreat. His email is: ed.helvey@gmail.com.